Skip to content
lalala i cant hear you! lalalalAAAaa! lol
hey you guys, this post today is going to be a review on a company called Sappho Cosmetics.
They sent me a few products to try and test out for you guys a while back. I decided to make
their review in a two parter. I think I’m going to do reviews like this from now on. It will allow
me to make more tutorials on my channel. I will do tutorials on my youtube channel and written
reviews w| swatches on my blog. What do you guys think? Anywho, lets get started!!!!!!!!!!

Eye shadows, I received 3 different eye shadows one pressed and two in pigments.
I love pigments.
The pressed eyeshadow was in “midnight” its a matte black. Highly
pigmented. most blacks I’ve tried turns out to be a chalky dark grey. BUT not this one.
The next on was a loose pigment eyeshadow in “grey stone” its a shimmery silver color.
Perfect to and everyday go to work/school look or even a night time club look. Its very
versatile and pigmented.
The other eyeshadow I received was a loose pigment in the color
“lala” which explain the “lala i cant hear you” phrase aha! 🙂 Did I make you laugh?? 😀
Any who, its sort of a shimmery peachy eyeshadow with hints of gold. In the container
it  looks gold, but when you open it you see its more of a peachy eyeshadow. Again, this
one is pigmented also.
All of them were extremely pigmented when used with a bases / primer.
It the pigments gives off a great metallic feel when used wet.
Then I received some foundation samples. Only one of them sort of matched my skin tone.
SORTA,  it was their “provocative pam” liquid foundation. It was their darkest color. The
only problems I had with it was that it make me look red ish and the smell. I don’t know
exactly what it smells like but its a DIFFERENT smell. 🙁  Its great coverage tho. 😀

Back To School Series 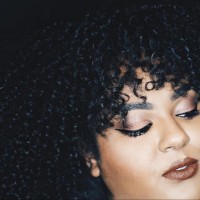